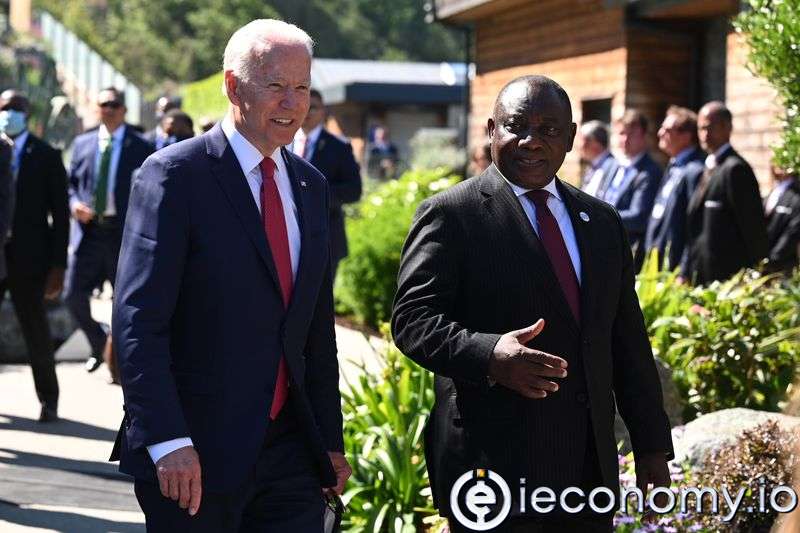 US President Joe Biden on Friday discussed relations with Russia during a White House meeting with South African President Cyril Ramaphosa, who has resisted joining Washington's campaign against Moscow over the war in Ukraine.

Biden, who is leading an international coalition to punish Russian President Vladimir Putin over the nearly seven-month war in Ukraine, wants South Africa's help in efforts that include forcing Moscow to sell its oil at below-market prices. After exchanging jovial greetings in front of the press, the two leaders spoke privately in the Oval Office for more than an hour on issues including trade, climate and energy, according to a White House statement. They committed to addressing "some of the world's most pressing challenges that we both share concerns about, including the Russia-Ukraine conflict and its negative consequences for food security in Africa," the White House said in a statement. Biden also announced $8.5 million in funding for a $45 million multinational initiative aimed at accelerating the phase-out of coal-fired power generation in South Africa. The additional US funding for the Partnership for a Just Energy Transition comes at a time when declining natural gas and oil exports from Russia and Ukraine have boosted South African coal and pushed back decarbonization targets for one of the world's most carbon-intensive economies. In recent weeks, Biden and his aides have been stepping up contacts with African countries as they cast a wary eye on the investments and diplomacy of rivals Russia and China on the continent. Ramaphosa has resisted calls to criticize Russia directly, instead generally opposing the use of force. In March, he blamed NATO's eastward expansion for instability and said the conflict should be resolved through United Nations mediation rather than Western-led sanctions that hurt "bystander countries". South Africa was one of 17 African countries that abstained from the UN vote condemning Russia's aggression. "Our position on this is respected, known and recognized," Ramaphosa told reporters after the meeting. "Clearly the conflict needs to be resolved. Our view is that it is best resolved through dialogue and negotiations." Ramaphosa's African National Congress (ANC) party, which has ruled South Africa since the end of white minority rule in 1994, had strong ties to the former Soviet Union, which trained and supported anti-apartheid activists. But since its peaceful transition to democracy, South Africa still enjoys a high degree of diplomatic influence among Russia's Western rivals relative to its economic size. US Secretary of State Antony Blinken, who visited South Africa last month, said Washington would not dictate Africa's choices after vowing to "do things differently" following former President Donald Trump's disparaging remarks about African countries. A bill passed by the US House of Representatives in April would boost US efforts to counter Russian influence in Africa. "We have expressed our discomfort and opposition," Ramaphosa said in a video uploaded to Twitter (NYSE:TWTR). "No one should tell us who to associate with and we should never be forced to choose who our friends are." Africans are generally unhappy about being the stage for competition between China, Russia and the Western order. The Ukraine war has exacerbated long-standing competition over Africa's natural resources, trade and security ties. War and inflation have pressured South Africa, where half the population lived below the poverty line even before the war dried up Russian and Ukrainian exports of grain and fertilizer. Biden will host more leaders from the continent in December, when ANC members will decide whether to keep Ramaphosa as party leader. Follow Global Economic Developments on Social Media! Click here to follow Ieconomy official Facebook account! Click here to follow Ieconomy official Instagram account! Click here to follow Ieconomy official Twitter account!
Önceki