Cryptocurrencies experienced sharp downward movements again. Bitcoin, the cryptocurrency with the highest trading volume, hit a 3.5-month low yesterday, while Ethereum, the second most popular cryptocurrency, hit a 2-month low. So what is happening in cryptocurrencies? Will the declines continue? What is needed for a rise? Kadir Kurtuluş, President of the Eurasian Blockchain and Digital Currency Research Association, evaluated all developments and expectations to hurriyet.com.tr.

Cryptocurrency prices tended to depreciate again after the US August inflation figures announced last week came in above economists' expectations. After the high inflation figures, the risk appetite in the markets decreased with the possibility that the US Federal Reserve (Fed) may turn to faster interest rate hikes, and declines in cryptocurrencies, which are risky assets, were inevitable. While cryptocurrencies started the new week with sharp declines; In yesterday's transactions, Bitcoin saw the lowest levels since June 9 and Ethereum saw the lowest levels since July 16. While the decline in cryptocurrency markets continued on the second trading day of the week; all attention is on the Fed The September meeting of the Federal Open Market Committee (FOMC), which sets the Fed's monetary policy, will conclude tomorrow. The Fed will announce its interest rate decision tomorrow at 21:00 Turkish time. Chairman Powell's speech will start at 21:30. Powell's remarks will be analyzed for any clues he may give for the upcoming meetings. Looking at the market pricing, it is almost certain that the Fed will raise interest rates by 75 basis points. In addition, after the inflation figures, the possibility of a 100 basis point rate hike is also on the table. Markets held their breath and focused on the Fed's interest rate decision. After the decision, markets are expected to find direction and risk appetite is expected to increase with the removal of uncertainty. If there are messages that the Fed may tighten its monetary policy beyond expectations, there may be pressure on risky assets.

THE LATEST ON BITCOIN AND ETHEREUM 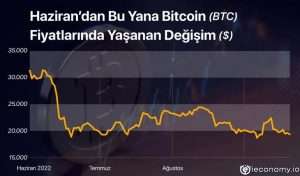 Ethereum (ETH), the second cryptocurrency with the second highest trading volume, is currently moving at $ 1356, down about 0.05 percent compared to yesterday's close. ETH saw the lowest $ 1341 and the highest $ 1392 during the day; It has fallen nearly 22 percent in the last 7 days. 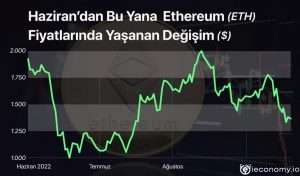 The market value of cryptocurrencies on a global basis has increased by about 2.72 percent in the last 24 hours to $ 932 billion.

THE FUTURE OF CRYPTOCURRENCIES IN THE HANDS OF THE FED

The main reason for the decline in cryptocurrencies is the 8.3 inflation figures announced in the US. These figures were higher than expected. Due to the figures, a 75 basis point interest rate hike decision by the Fed is considered certain. It is even possible that the Fed may announce a 1 point rate hike. Many situations such as the place of institutional investors in the market, the unpreparedness of the market for extraordinary situations have made the crypto market a Fed-driven market. We can say that the future of the current cryptocurrencies is in the hands of the current system, the Fed. Cryptocurrencies, which are decentralized in name but affected by Fed decisions in reality, are currently buying the expectation of interest rate hikes. This leads to the disposal of cryptocurrencies, which are shown as risky assets, i.e. declines. Follow Global Economic Developments on Social Media! Click here to follow Ieconomy official Facebook account! Click here to follow Ieconomy official Instagram account! Click here to follow Ieconomy official Twitter account! Source: hurriyet.com.tr
Önceki