Tayyip Erdoğan; "We will take inflation under control and maintain growth" 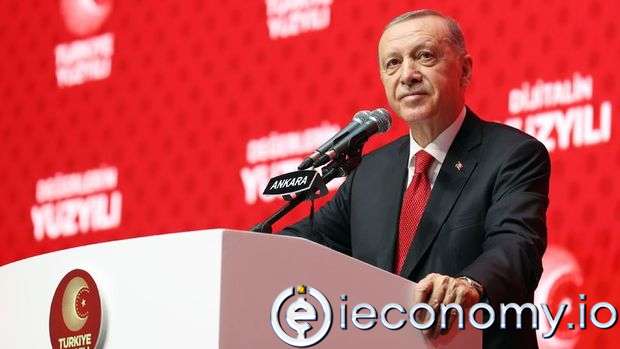 Tayyip Erdoğan; "We will take inflation under control and maintain growth"

President Recep Tayyip Erdoğan made the following statements in his evaluation in the program he attended: ''According to purchasing power parity, we have made our country the 11th largest economy in the world and the 4th largest economy in Europe. In terms of gross domestic product, our country has grown 172 percent in real terms and 237 percent in dollar terms in the last 20 years. Turkey's economy grew by an average of 5.5 percent per year, doubling to 11 percent in 2021. Hopefully, we will continue to grow our country through investment, employment, production, exports and current account surplus by controlling inflation. In trade, we have increased our exports from 36 billion dollars to over 250 billion dollars, while expanding it to 228 countries and regions in the world. We have also increased our foreign trade volume to 500 billion dollars. We have supported and strengthened our tradesmen and craftsmen, whom we have seen as the backbone of our nation for a thousand years, with all opportunities.'' Noting that they have increased the power in the world from industry to agriculture, President Erdoğan added: "We will make Turkey one of the largest global industrial and trade centers by supporting the right production areas based on advanced technology, with high added value, wide markets and increasing employment. We are transforming the upcoming period into a period in which we will discuss and implement new and effective production strategies in this direction." Stating that the Century of Turkey is the century of productivity, Erdoğan concluded his words with the following statements: "While the economic fluctuations triggered by the pandemic and war deepen the energy, health and food crises at the global level, we have already managed to differentiate from this bad trend. We are building the Turkish Economic Program, which will grow our country through investment, employment, production, exports and current account surplus, on productivity. We will further develop activities that will increase production and exports in areas of vital importance for ourselves and the world, and contribute to the green development revolution, with the principles of efficiency." Follow Global Economic Developments on Social Media! Click here to follow Ieconomy official Facebook account! Click here to follow Ieconomy official Instagram account! Click here to follow Ieconomy official Twitter account!
Önceki